Opportunity for singers and teachers 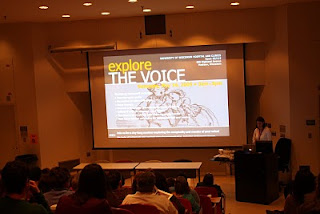 Madison Opera is excited to work again this summer with the UW  Health -Voice and Swallow Clinic on the 11th Biennial Phonosurgery Symposium. Tucked into this highly specific medical conference is a morning geared towards singers, teachers, and other professional voice users. From the brochure:


We invite you to attend a half-day of workshops targeting the multifaceted nature of voice care and use. We urge voice teachers, vocal coaches, singers, actors, choir directors, otolaryngologists, speech pathologists as well as all those with an interest in voice to participate in this morning of hands-on workshops. These presentations will address concerns from medical, behavioral, artistic and prevention standpoints. Workshops will focus on considerations for intervention, issues with the performing voice as well as techniques for a variety of singing styles.

Madison Opera will be there, running a "Production Perspectives" workshop and providing information on Opera in the Park. Additionally, soprano Julia Faulkner (Madison Opera's The Tender Land, The Turn of the Screw, The Flying Dutchman) will be leading a master-class at the event.
Posted by Madison Opera at 11:04 AM 1 comment: 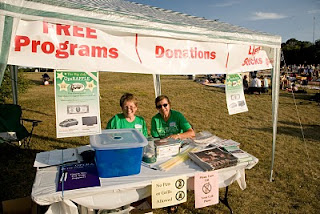 Madison Opera is looking for responsible, energetic volunteers for Opera in the Park 2010. Assist with everything from event set-up and parking to raffle ticket and light stick sales or program distribution, all while enjoying a fantastic night of opera. If you're interested in helping us out on Saturday, July 17th in Garner Park, e-mail your contact info to volunteer@madisonopera.org, subject line "Opera in the Park." Thanks and please help us spread the word! 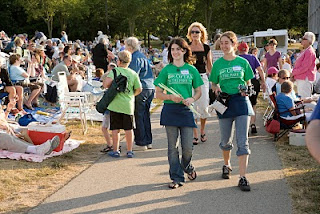 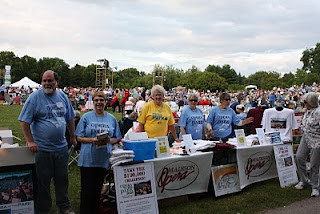 Posted by Madison Opera at 3:47 PM No comments:

Opera in the Park Raffle - Win cash or an iPad!

As mentioned in the previous post, one of the general sessions at the Opera America Conference was "A Conversation with Placido Domingo." Maestro Domingo needs no introduction, so without further ado, here are some Twitter-scaled quotes from the session, moderated by Opera America CEO Marc Scorca:

On early influences:
"My mother [a zarzuela performer] was supposed to sing the day I was born." (Perhaps this explains why he is able to sing Wagner, at age 69, just months after surgery.)

On opera in general:
"Our love for music...our craziness for opera."
"There's no business like show business, but opera is not a business."

On the new generation of singers:
"Frankly, today we live in one of the most exciting times for opera."
"Today it is difficult to find a singer who is not also a musician."
"You have to take the risk and discover talent."

On American audiences:
"Ten minutes of ovation in LA is the equivalent of an hour in Vienna."

On Simon Boccanegra:
"I don't pretend to be a baritone, I just enjoy the role."

On the future:
"I still feel that I can sing, so I don't want to retire." (This received hearty applause from the audience.)

The secret to longevity:
"Always searching for new roles...it has been the itch to keep searching that has made my career very interesting."
Posted by Madison Opera at 9:59 AM No comments:

Last week, General Director Allan Naplan, Director of Development Beth Tolles, Trustee Martin Barrett, Trustee Sally Miley, and myself (Brian Hinrichs, Manager of Communications and Community Outreach), embarked on an expedition to Los Angeles for the Opera America National Conference, hosted by the Los Angeles Opera in the midst of their first Ring Cycle. This meeting of the operatic minds proved to be invaluable for us all.

As a group, we were challenged by the composer Daniel Catan to change the premiere system for new American works. Consultant David McIntosh asked us to look outside of the arts to gain inspiration for new business models. Washington Post critic Anne Midgette told us to embrace bloggers. Tenor Placido Domingo (above, with OA president Marc Scorca) reflected on the changes he has witnessed over the course of his legendary career. And that's just the start.

Perhaps the greatest value of the conference was the opportunity to talk with and learn from colleagues in our own departments across the country, to see what's working in Denver or Houston or Birmingham and how that might apply to Madison. For instance, on the first day of the conference I was enlightened by Marc Van Bree, Ling Chan, Margo Drakos, and Ceci Dadisman in a seminar focused on social media. Madison Opera's blog, Facebook, and Twitter networks might already be extensive, but there are many more exciting apps and initiatives we may adopt to spice things up and streamline our communications, so stay tuned on that front!

Opera America usually pivots the conference on a performance by the host company. This year, LA Opera presented Richard Wagner's Die Walkure in a production by the artist Achim Freyer, whom we also had the unique experience of hearing talk about his training under Bertolt Brecht and his aesthetic philosophies. It's a controversial interpretation, but we all left stunned by the power of the visual world Freyer created. And what a thrill to hear Placido still singing Siegmund at the age of 69!

Lest you think this was a vacation of sorts, let it be said that my poor digital camera only took 4 pictures in 4 days! Here you have the the beautiful Disney Hall, the home of the LA Philharmonic designed by Frank Gehry and conveniently located at the corner of our conference center: 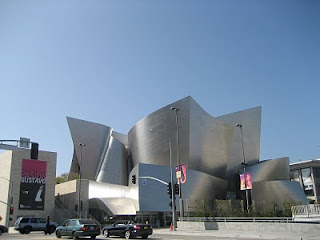 It was a jam packed few days, and while there was much valuable, practical advice to be taken home, the energy to try new ideas and excitement for the vitality of our art form that we all left with is immeasurable. Garry Marshall--the actor, comedian, TV producer, film director and opera buff--made a guest appearance at Opera America's 40th Anniversary Gala on Friday night. In addition to some truly hilarious anecdotes, he maybe said it best: "The magic is still there in opera...keep doing that magic."
Posted by Madison Opera at 11:56 AM No comments: 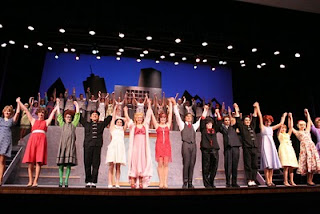 On Sunday night the Overture Center for the Arts hosted the first annual Tom Wopat Awards for Excellence in High School Musical Theater, aka The Tommys! It was a special night, with Overture Hall brimming with energy and excitement. The six winning schools for outstanding musical each performed a medley, as did all winners for outstanding lead performer (pictured above is Janesville Craig High School's winning production of "Thoroughly Modern Millie.") Over in the presenters section, we just couldn't believe the talent on stage. The voices, the dancing, and the maturity and aplomb of everyone on stage was truly thrilling.

It was also exciting to pick out Madison Opera High School Apprentices, past and present. Former apprentice Carrie Juergens was a big winner for leading performer in "Once on this Island" at Waunakee Community High School. Also on stage belting it out were Abigail Graf in Monona Grove's best musical medley for "All Shook Up" and Caitlin Miller in River Valley High School's "Little Shop of Horrors." A big thank you to Overture's Tim Sauers for organizing a fantastic event, and a special nod to Madison Opera chorus master Andrew Abrams, who acted as pianist and music director for the show. Pictures are now online here.
Posted by Madison Opera at 12:55 PM No comments:

Attention renewing subscribers: the clock is ticking! If you wish to retain your seats from seasons past, please complete your 2010-11 subscription order form by this Friday, June 4th. It's easy: either subscribe online, mail in the brochure order form, or call (608) 238-8085. You can also swing by our office at 3414 Monroe St. if you'd prefer to place your order in person.

Posted by Madison Opera at 9:45 AM No comments:

Have you heard about The Tommys? Last year, the Overture Center for the Arts announced an exciting new initiative to honor and advance high school musical theater in Southern Wisconsin: the Tom Wopat Awards for Excellence in Musical Theater. Twenty three regional high schools participated in the program, which concludes this Sunday, June 6th at 7 p.m. with a full blown awards ceremony in Overture Hall.

How did it work? The Overture Center dispatched industry professionals to rate and review each participating school's production. Overture Center's Director of Marketing and Community Engagement Tim Sauers attended every performance, and he compiled reports to send each school based on reviewer feedback, which also eventually shaped the winners. You can read more about the process in this article in 77 Square.

Why do we care so much about The Tommys? For starters, the program offers valuable constructive criticism for the participating schools, which encourages improvement and builds excitement for future productions. At the same time, the awards provide recognition for hardworking drama kids and teachers who spend countless hours putting on a show...something we can relate to!

Also, it turns out there is more than one direct connection to Madison Opera with this year's inaugural winners. Our Flora for The Turn of the Screw in January, Jennifer DeMain (daughter of Maestro John DeMain), is an outstanding leading performer winner for Edgewood High School's production of "Anything Goes", and so is our Director of Finance and Administration's daughter, Charlotte Martin, also for "Anything Goes" (the two stellar seniors were double-cast as Reno Sweeney)! Not to mention, your blogger here was a reviewer for the Tommys, and is also a presenter at the awards ceremony this Sunday.

So it has been an exciting year for this new initiative, and the upcoming ceremony--featuring performances from winning schools--will surely be a fantastic event. It's open to the public, with general admission only $15, so come on down.

One last note, in case you're wondering: why Tom Wopat? The Broadway star is a native of Lodi, Wisconsin, just 20 minutes north of Madison.
Posted by Madison Opera at 10:45 AM No comments: